Previously published on A Writer Who Fashions, May 12, 2019. Some updates have been made.

I know y’all have been hitting that refresh button every 30 seconds in anticipation of this moment. Well, hold on to your mouth-flapper, folks, ’cause it’s about to DROP.

I FINALLY LEARNED HOW TO PACK

Where’s my freaking trophy because I have achieved professional packing status with this trip. I actually did the thing that magazine articles have been telling me to do for years: I packed only what I needed and made multiple outfits from only a few items.

I can feel your disbelief from here. “Whaaaaat?!” you screech while spitting coffee at your computer screen. “Are you telling me,” you continue, uncaring of the comical amount of liquid dribbling down your shirt, “that you didn’t overpack this time? You didn’t close your suitcase by sitting on it and bouncing up and down as it hilariously strains against its outlandish girth?”

No, my friends. Not this time.

What I had to get past was the idea that I needed a completely unique outfit for every day of my trip. That I, for some reason, might need those weird-colored shoes that I never wear, just in case Vacation Jessie would suddenly be gasping to wear salmon sandals that MATCH NOTHING I OWN. (Drunk-shopping is not a joke, friends.)

In fact, I made an actual list of what outfits I would wear each day, and stuck to it as if deviating even slightly would cause my suitcase to explode. Like the movie Speed, only with even more sexual tension.

For the record, we had a blast. Now that the boys are older, we don’t get to hang out with them as much as we’d like.

So spending time as a family was much needed. And NYC was definitely cool. A vibrant, buzzing atmosphere of diversity and culture. And the occasional helpful subway crackhead. (True story. We were about to get on the wrong train and a suspiciously cheerful gentleman pointed us in the right direction. Thank you, kind sir! Please enjoy an extra hit on us.)

But it was also exhausting and expensive. There’s so much to see and as anyone who has ever traveled with a group knows, it’s impossible to do everything everyone wants to do. And it’s been so long since we’ve been on vacation as a family I somehow forgot that my husband is not exactly a “go-go-go” kind of traveler. He’s more “I’m on vacation so I’m going to move infuriatingly slow” whereas I’m “we paid all this money to be here so quit dicking around and LET’S GOOOOOO,” so there were some moments.

STATUE OF LIBERTY HAD ME FEELING SOME FEELINGS

When the boat pulled up next to the ole gal, I just started thinking of my German grandpa, who emigrated when he was only a little tyke. I imagined my great-grandparents holding him, all excited and nervous about starting over in the land of opportunity. It legit got me choked up. The boat was filled with tourists from all over the world and watching them eagerly take pictures made me realize how iconic she is, and not just to Americans.

There are so many more stories I could tell:

How I accidentally ordered sushi but it ended up being my favorite meal in NYC. (Courtesy of the rooftop restaurant at Sanctuary Hotel).

How our first night there my husband went to a little shop to get snacks and a guy pulled a knife on the shop owner (who was unimpressed, but only because it turns out they were friends and the guy was messing with him and/or gullible tourists like my husband).

How the boys let themselves be caught by one of those flyer-flapping dudes and Eric and I mocked them mercilessly for blocks. (“You made eye contact?! Rookie mistake!”)

But I’ve rambled on way too long, so until next time… here’s a tightly cropped shot of us at the Empire State Building because there were approximately 894789 other people all waiting to stand in this exact spot. 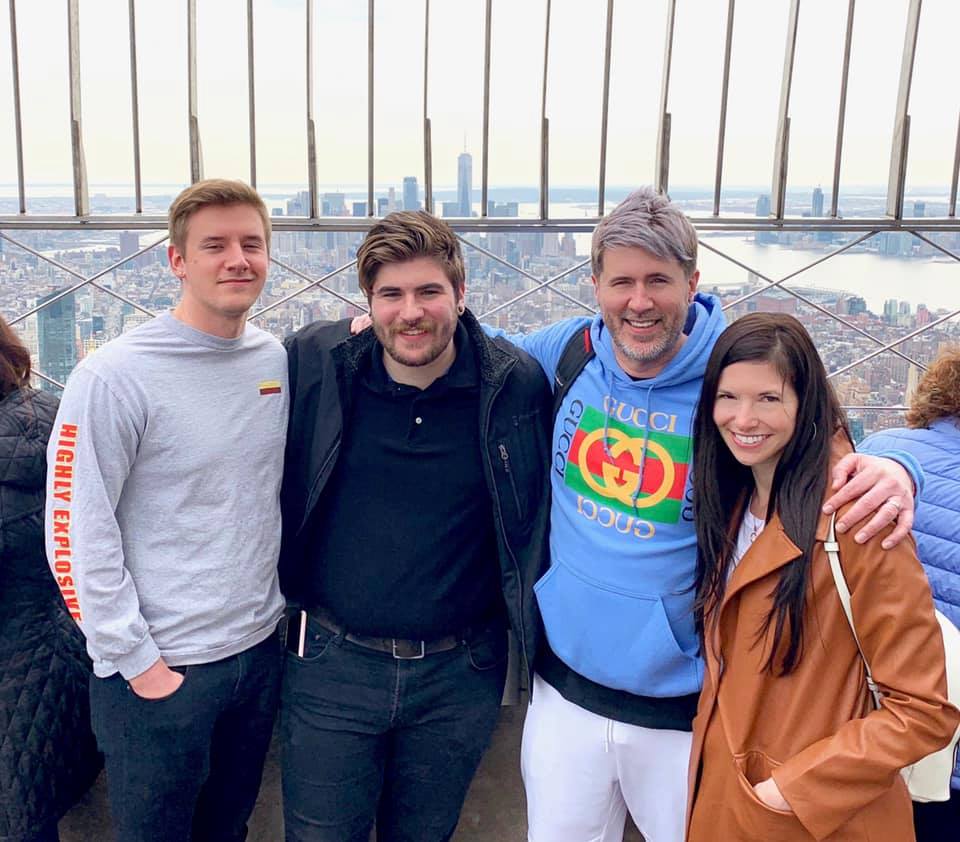